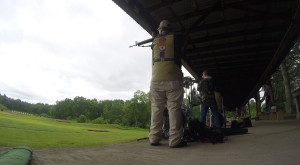 It’s a long drive for me and when that alarm went off at 5:30 I was very tempted to roll over and go back to bed. I’m glad I did not.

They have a beautiful range way back in the woods. (it’s a little hard to find by GPS) 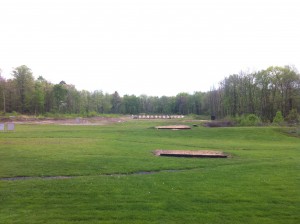 This was their first as issued match they worked hard to make it a good one and did a very nice job.

We used a single target per person. We walked down to score and paste between each string (including the sighters) the breaks made for a nice leisurely pace with plenty of time to re-focus. There were lots of new shooters there and everyone was very helpful.

My slow prone was less than stellar. My working excuse is I kept fiddling with the elevation knob and managed to take a shot with it bottomed out. I’ll have to keep an eye on it. I may need to replace some parts if this keeps happening.

On a positive note I think I have finally figured out how to place the scope stand. Which long story short is bring it all the way down and pull it in real close. I quickly learned to tighten everything on the “head” so when I bump it I don’t end up looking at the grass or the woods or New Jersey.

I really felt great in rapid. I practiced dropping to a natural point of aim from standing during the prep period. Which helped me find the a nice position.

Off hand well… is off hand.

This was good enough for me to make third place and they were kind enough to give me a pin. Which made my day!

I will definitely be back. Next month I’m taking the 1917 back to Kimberton to try redeem myself after my poor showing last time I took it out.