This year I signed up for as many matches at Camp Perry as I could squeeze on the calendar. It was a long eight days of shooting with eight different events all the way from Small Arms Firing School (SAFS) through Games Weekend, Vintage Sniper, Garand, Springfield, Vintage Military, and  Carbine wrapping up with the big Black Rifle matches: the NTI and P100. I had a great time, shot well in several events, and took some lumps in others.

This was my second trip to SAFS. I had learned a lot last year which I had been applying throughout the year and I was determined get some good coaching and to try and get those 4 “intro points” this year.

I signed up for the “basic” course again. The difference between basic and advanced being that the basic group gets a couple of hours of dry firing based instruction while the advanced group stays in the AC for additional classroom instruction. Knowing how I learn I figured the dry fire portion of the basic class would be of the most benefit to me.

My firing points coach was Sgt Manning from the Army Reserve Marksmanship Team. He gave me some great advice and I couldn’t have asked for a better coach. I picked up some good tips on the sitting position and off hand and even slinging up. For the latter, I had been stubbornly putting my sling above the pad on my jacket. Letting it a little lower on the pad does help keep the pulse down in the front sight.

The day of the SAFS M16 EIC match it was sunny and beautiful. Mid to high 70’s lighting was perfect, and the humidity stayed low at least for the first two relays. I was on relay two; the fella I had been squad-ed with the past couple days set the bar pretty high in the first relay so the pressure was on.

I was able to clean slow prone, as I had been hoping  to, so I could bank up some points for the other stages. Don’t give me too much credit it was a SR target at 200 as opposed to a reduced MR target so the 10 ring is fairly attainable.  I remembered to take my time in rapid prone and shot a 99 with a nice tight group. 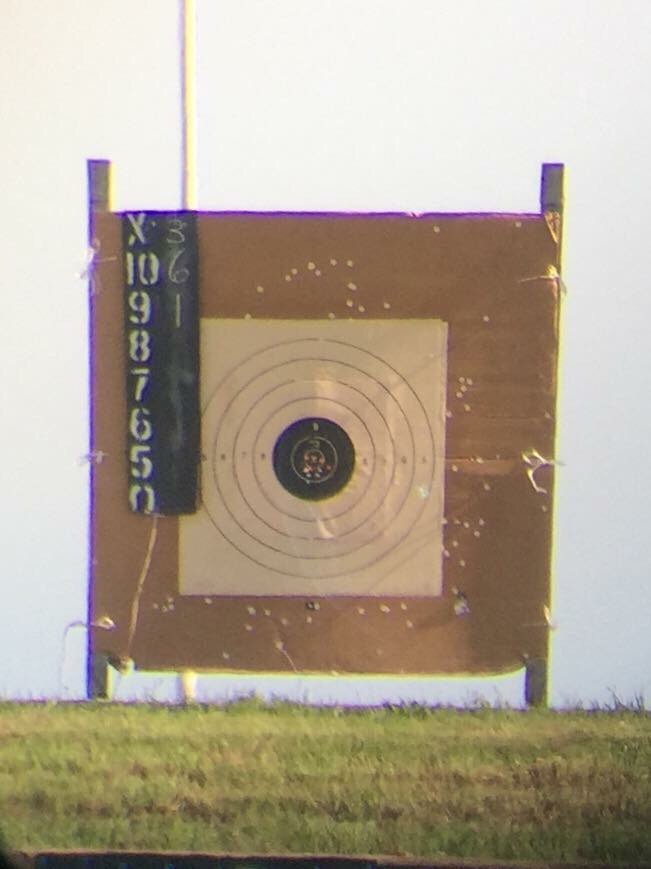 I must have gotten a little cocky by rapid sitting. I didn’t feel as stable as I wanted and rushed too much, dropping some 7 and 8s. It hurt a little to post an 86, especially knowing I’ve shot as high as 99 a few times in sitting…. Plus, I was saving that 80 something for off-hand.

Sgt. Manning, my coach, knew  I was grumpy about posting that score and gave me a little pep talk. “Those shots are gone” a phrase that I have been repeating to myself ever since. I’ve heard plenty times to let go of bad shots and that only the next shot counts, but apparently it took that phrasing for it to finally click for me.

Rarely have I been able to recover from a bad string by making it up in off hand (ie The D-Day match at Talladega) however I’m happy to report I was able to walk it home shooting on two legs and made the cut for my first leg points. I ended up at number 14! Of course I still ask myself where I would have finished if I didn’t bumble sitting.

See CBI’s write up of SAFS with me by clicking here.

My shooting partner arrived at Perry with his original A4 to get the GTB shooting team back together in time for the Vintage Sniper Match. I had never shot a match in this format and frankly, neither of us had a great grasp on how to read wind. We had spent a fair amount of time worrying, strategizing, and throwing rounds down range. So, at least we had a 300 and 600 yard zero. 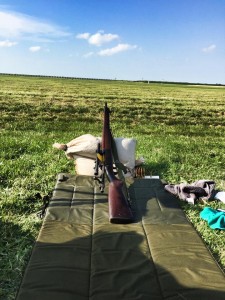 We had some trouble getting the seventy plus year old scope adjust elevation and the it was getting a bit stressful in the last few minutes of the sighting period. However, in the end we were able to squeak by the bronze line. Which was a nice surprise!

The Garand Match was what I was hoping to do well in. Things were going well in the beginning, four tens in a row. I was on fire, well, then I burnt the house down. I was picturing that fifth ten coming up… waited…. waited… and my scorer calls for a mark. Yep, I cross-fired like a rookie. It got under my skin and I rounded it out with nines. Due to a goof up with CMP’s system my shooting buddy was down at Viale shooting the Garand match, and I didn’t want to have to explain why I didn’t make the cut. After a little pep talk from my scorer (a friend  from my club) who told me I was doing fine just “Don’t F up” again, I pushed hard to make that bronze cut.

I may have only made the cut by a point, and have posted better scores in the past but it felt great to take home a medal by a hair after bumbling slow prone. This was my 4th Garand Match at Perry and it had been a goal of mine to take home a medal from this match. I’m happy to have finally made it. Maybe next year I can “not F up” and bring home one of a different color. 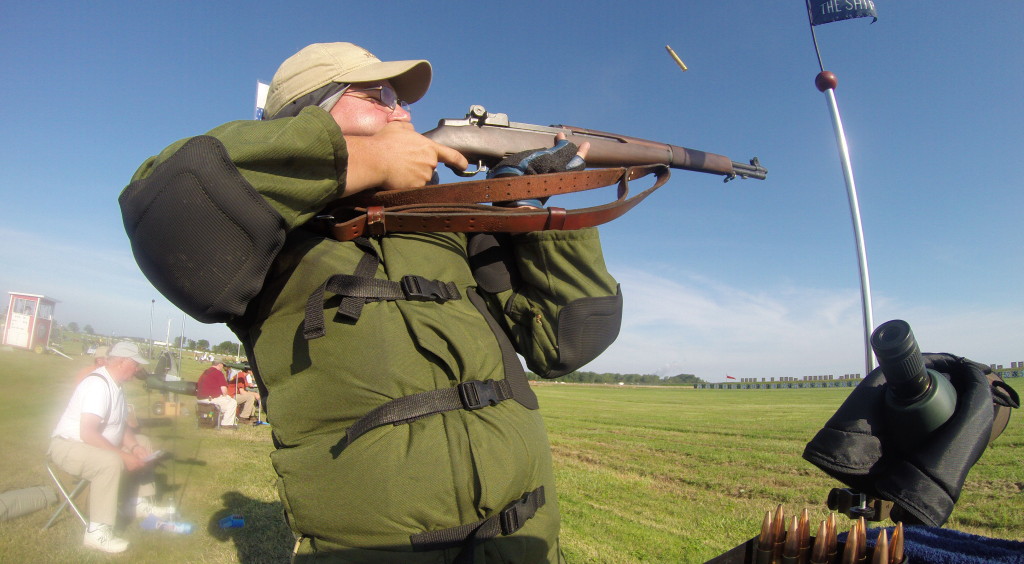 This is the first year I have had a Springfield to shoot in this match. I had pieced together a 03A3 from parts and CBI barrel. This rifle had performed well for me at a local match and at the range so I was excited to try her out at Perry. Rapid prone has been my nemesis with the bolt guns,  HXP and my handloads have been giving me some trouble on primary extraction, so I picked up a couple of boxes of Creedmoor sports new match ammo. That stuff proved to be just the ticket for smooth and accurate rapid fire with my bolt guns. I was able to take home a Silver in the Springfield match posting what, at the time, was my personal best across wood guns! 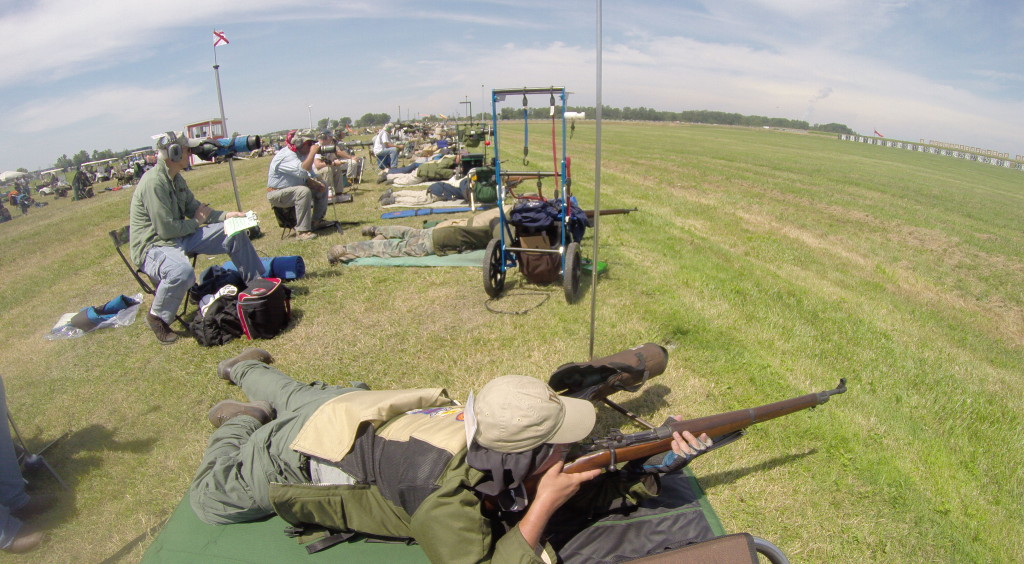 The old 1917 and I have never gotten along very well, this blog is full of posts about some terrible scores I’ve posted with this rifle. Only once in a practice session did I shoot it over the medal cut and that was probably exceeding the 80 seconds for  rapid. However thanks to a great slow prone stage, a little luck, and perhaps all the trigger time I was able to wrap up “games weekend” with a bronze with the 1917!

This little gun killed my streak. Well to be fair it wasn’t all the gun. I wasn’t familiar with the course of fire which put me out of my comfort zone. All stages are fired from a magazine, “slow” prone is 10 rounds in 5 minutes and off hand is 10 rounds in 10. The latter I missed during the range commands and had assumed it was five as well. That said, I still wouldn’t have made the cut even if I ended with a great off hand. This match is a walk and paste with no pit duty, so it makes for a nice easy day and a welcome break between the games events and the NTI/P100. 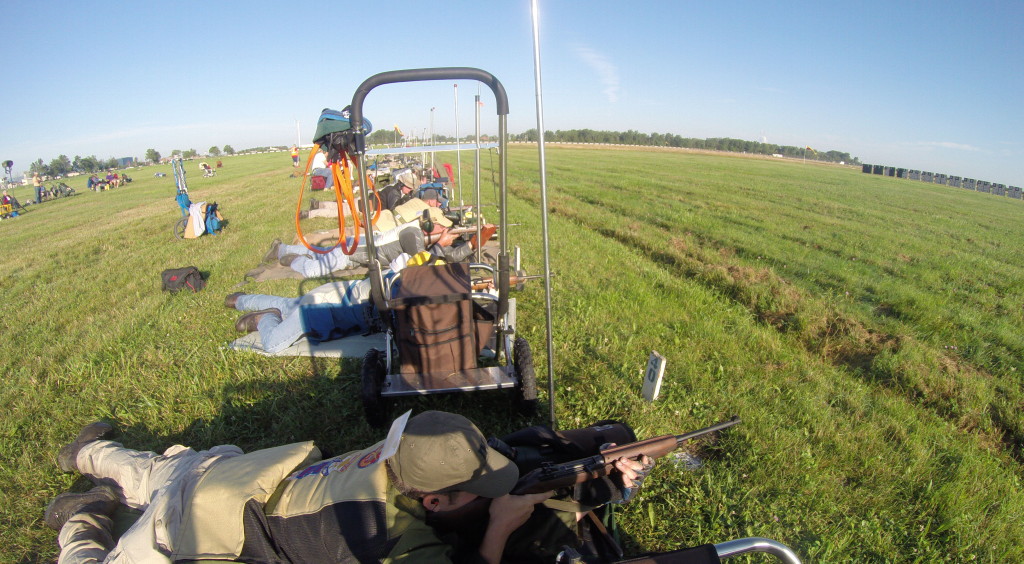 I clearly need to go back to the lab on this gun and get some trigger time. However, and I hate to type this, but it might not be worth it to put the time in on the carbine.

The Board Matches: NTI and P100

The National Trophy Individual Match (NTI), the Presidents 100 (P100) and the various team matches are the “serious matches” at Perry.  I signed up for the NTI and the P100 which was a first for me. Prior to this I had never shot in a match with a true 600 yard stage. Oh boy, did I learn a few things.

I had a bumpy start to the NTI. The wind is notorious at Perry and short of the sniper match a couple of days before I had no experience reading the wind. So, after a bad wind call and swaying too much in off hand I started off the NTI with a miss. I kept it mostly in the black after that. For the P100 I did much better in off hand.

I apparently over corrected my wind for sitting during the NTI and was about a minute left. In rapid prone I was low about a minute, but otherwise had a nice group. I expected some differences  with my zeros at Perry so chalk it up as learning. 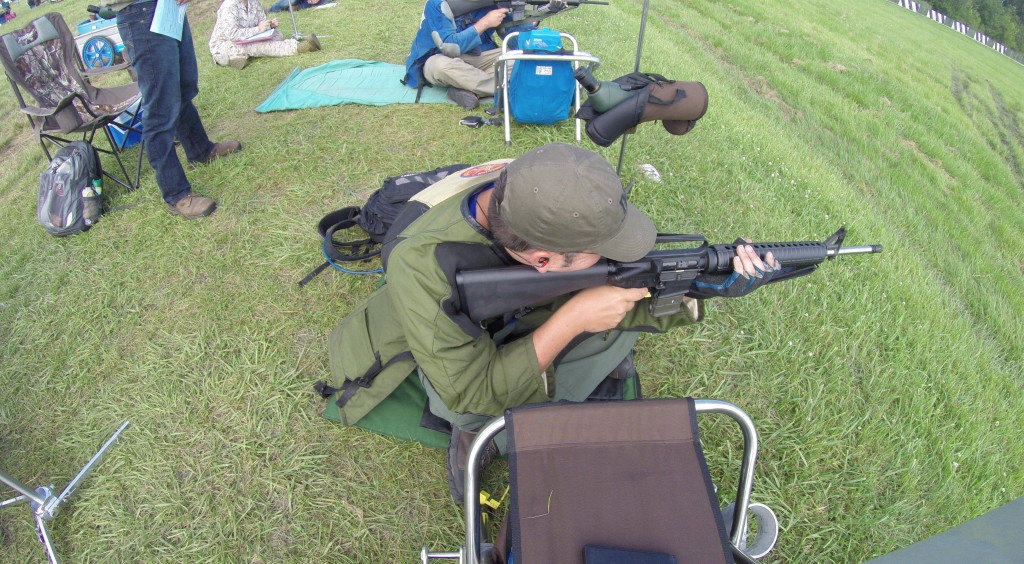 Back to the 600 yard line. As I mentioned earlier, the NTI was my first time the at 600 in competition. In the reduced matches I am pretty confident on my belly, but the wind and distance is certainly humbling. The 20 rounds of the NTI were definitely learning experiences. I tried to take what I learned in the NTI and use it in the P100 where, after losing some points on my first shot due to a bad initial wind call, I did much better. 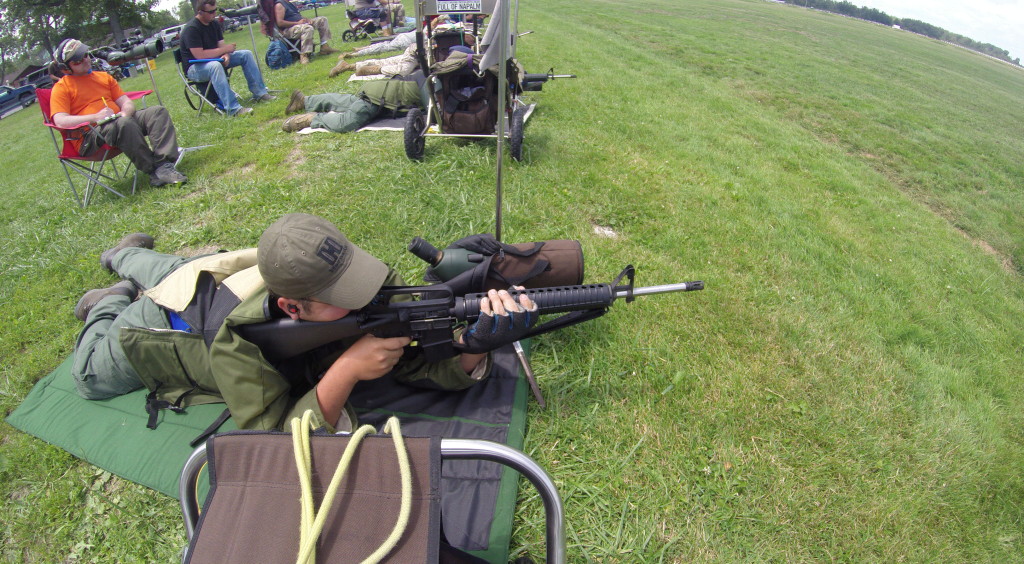 The 600 yard line on Rodriguez

All said it was a great week. I made the SAFS points and brought home my first medals from Camp Perry. I learned a lot of lessons (some the hard way) and had a great time. After this trip to Perry I am inspired to start trying to chase some EIC points. I plan to start focusing on EIC matches and getting a bit more serious about the black rifle.